Jorge Masvidal recently clapped back at Colby Covington for saying that Masvidal’s physique was Photoshopped in the UFC 272 poster.

‘Gamebred’ appeared on the scales for the UFC 272 weigh-in in peak condition. In a recent Instagram post, the Miami native took a shot at ‘Chaos’:

“Thank God and thank you photoshop for the abs. Shoutout to my boy for the dope tattoo work @jk_tattoos # ufc272”

Covington recently claimed that Masvidal doesn’t have abs like him. In a YouTube clip uploaded by The Combat Sports Central‘Chaos’ had this to say:

“Let me show you why they call me raw American steel and twisted sex appeal. They didn’t have to Photoshop these abs on me like they had to do on Jorge. Looked like some kindergartener photoshopped those abs on the poster for Jorge. He ain’t got no abs. “

Masvidal’s physical condition might just indicate that he is more prepared than ever. It shouldn’t come as a surprise considering the animosity between him and Covington.

Masvidal and Covington were once teammates, roommates, and very food friends. Things started to go downhill in the relationship when ‘Chaos’ allegedly didn’t pay their trainer Paulino Hernandez, who is close to Masvidal. Covington’s ‘heel’ persona did not help either as he started to throw jibes at other people in the gym, including Dustin Poirier.

The duo will finally get to settle the beef inside the octagon at UFC 272.

Colby Covington is the bookmakers’ favorite to beat Jorge Masvidal

Covington is currently a big favorite to emerge victorious in the main event of UFC 272. Due to his relentless pressure and well-versed wrestling game, many believe he will grind out Masvidal.

However, ‘Gamebred’ is a veteran fighter with a tricky striking game. To top that off, Masvidal has legitimate knockout power. So, it’s hard to count a fighter of his caliber out of any fight.

The duo engaged in a heated face-off at the ceremonial weigh-in show on Friday. There has been no shortage of drama throughout the fight week. In just a matter of hours, Colby Covington and Jorge Masvidal will fight in the main event of UFC 272.

Watch the final face-off between Covington and Masvidal ahead of UFC 272: 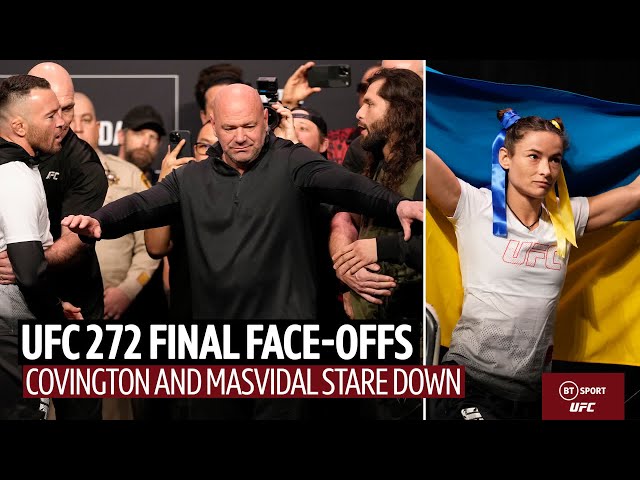