A fresh round of talks between Russia and Ukraine focused on discussing a potential ceasefire with an immediate withdrawal of troops, a Ukrainian official said Monday.

Oil fell below $ 100 a barrel as negotiations between Ukraine and Russia appeared to grow more substantive and China imposed a lockdown on an entire province to stem the spread of Covid-19.

Futures in New York fell more than 8% to a low of $ 99.76, trading in a $ 10 range on Monday. A further round of talks between Russian and Ukrainian officials focused on discussing a potential ceasefire with an immediate withdrawal of troops and security guarantees, Ukraine negotiator Mykhailo Podolyak said.

The negotiations between the two countries are driving prices lower in the near term as markets are “much more sensitive to sentiment than actual supply and demand calculation,” said Rebecca Babin, senior energy trader at CIBC Private Wealth Management.

Risks to demand have also emerged with a resurgence of lockdown measures in China amid a surge of Covid-19 infections. The world’s largest importer of oil placed 17.5 million people in Shenzhen under a lockdown and forbade people in Jilin province to travel, the first time the country has sealed off an entire region since April 2020. 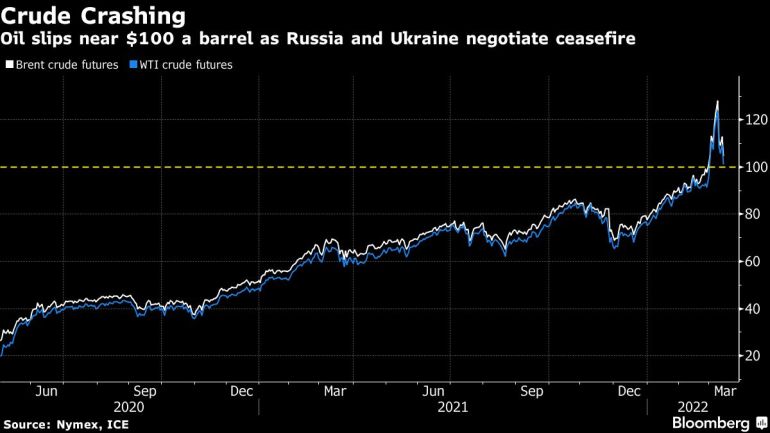 Oil prices soared after Russia invaded the Ukraine in part due to fears that the loss of Russian flows may stretch an already tight market. Surging energy costs have added to inflationary pressures on the global economy, forcing banks to contemplate a phase of monetary tightening. This week, the Federal Reserve will likely raise interest rates for the first time since 2018, potentially strengthening the dollar and adding pressure to oil prices.

As the humanitarian crisis mounts in areas under heavy bombardment, there’s a flurry of diplomatic efforts to try and stop the war. A top adviser to Ukraine’s President Volodymyr Zelenskiy said “continuous” discussions with Russia are under way by video, while Russian President Vladimir Putin engaged with his French and German counterparts after they talked with Zelenskiy. US Secretary of State Antony Blinken also spoke with Ukraine’s foreign minister.

Meanwhile, the prospect of extra oil supply from Iran quickly alleviating a tight market was dashed on Friday after Tehran and world powers suspended talks to restore a nuclear deal. Russia sought US guarantees that sanctions imposed for its invasion would not affect its planned partnership with the OPEC producer. Iran carried out a missile strike in Iraq after the breakdown of negotiations.

While Russia has been hit with tough sanctions and the US has banned imports of its crude, funds to the nation may not be completely choked off yet. India is said to be working out a mechanism to facilitate trade using local currencies, while supertankers were still being booked to load Russian oil off Denmark. At least some ships will be for cargoes that traded prior to the invasion.