Kenny McLean’s late equaliser for Norwich (90 + 1) looked to have denied Leeds a deserved victory, until Raphinha rounded goalkeeper Tim Krul and teed up Gelhardt to seal the win (90 + 4) to the delight of the Elland Road crowd.

Unbelievably, there was an opportunity for Norwich to level again in stoppage-time, but Leeds goalkeeper Illan Meslier was equal to Teemu Pukki from close range.

It ends a run of six defeats on the bounce for Leeds, who were back to their high octane best on Sunday afternoon, and leaves their relegation rivals rooted to the bottom of the Premier League table, six points from safety.

Man of the match: Raphinha.

Rodrigo opened the scoring for Leeds (14) after his right-footed effort from just inside the box took a fortunate deflection off the calf of Norwich defender Ben Gibson before nestling in the bottom corner.

Norwich were incensed by the decision to allow the goal, as they felt Patrick Bamford was interfering with play from an offside position in the build-up.

After missing three gilt-edged opportunities in the first half, it looked like Leeds would be made to pay for their wastefulness in front of goal when Norwich were awarded a penalty after Luke Ayling brought down Milot Rashica in the area.

But referee Stuart Attwell reversed his decision after being told to go to the pitchside monitor by the Video Assistant Referee.

Wasteful Leeds back to their best

It was an electrifying first half performance from Leeds in front of a raucous Elland Road crowd, who were off their feet when Raphinha hit the bar from close range after a superb cross from Bamford. 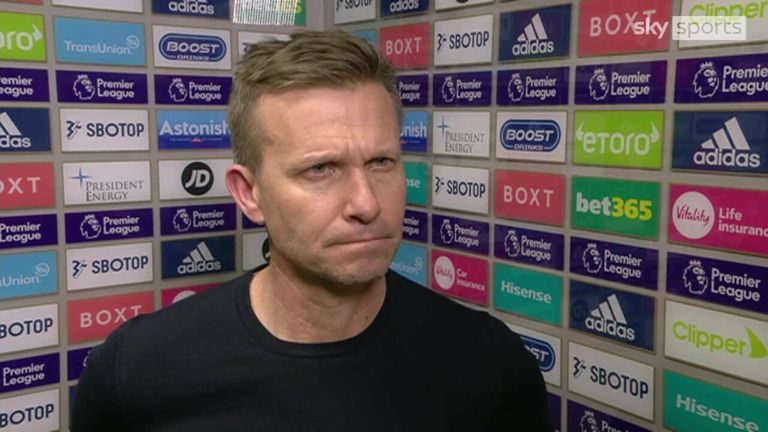 Leeds head coach Jesse Marsch says it’s a step in the right direction after a dramatic finish resulting in a 2-1 win against Norwich City.

From the resulting corner, there was a gilt-edged opportunity for Pascal Struijk as he skied the ball over the bar from inside the six-yard box after Krul parried his initial header back to him.

Bamford, who only lasted 45 minutes on his first start since September, was also presented with a big chance to extend Leeds’ advantage but fired wide when one-on-one with Krul in what proved to be a wasteful first half for the hosts.

Norwich were overawed by the ferocity on the show from Leeds and failed to make any real impact in the first-half, with their only shot on target a scuffed effort by McLean which bobbled into the arms of Meslier.

Leeds continued to carve out opportunities in the second half, and had the ball in the back of the net after 52 minutes as James swept in the rebound of Raphinha’s close-range shot after a fine save from Krul, but the Wales international was offside.

Anxiety levels began to grow at Elland Road as the game wore on, and it looked as though they would be made to pay when Norwich substitute Jonathan Rowe struck the bar with a left-footed effort after 70 minutes.

Raphinha struck the crossbar again, this time from a free-kick, which saw the tension grow among Leeds supporters.

When McLean slid home the Norwich leveller in the first minute of stoppage time after Pukki’s low cross from the right-hand side of the box, Leeds’ worst nightmare became a reality.

But they rallied and found a way back in it, as Gelhardt – brought on in stoppage-time – won a header to feed Raphinha, who skilfully found a way past Krul, to return the ball to the substitute and give Leeds their first win since January’s 3-2 victory over West Ham.

‘We felt the magic of Elland Road’

Leeds boss Jesse Marsch said: “I’ve heard a lot about the magic of Elland Road and I think we felt that today.

“The crowd was fantastic, I think the performance brought the crowd into the game. The three points are incredibly massive for us, but we played well and we deserved this today. We had big chances.

“If we were a little bit cleaner in the last third, with some of our chances in the first half, I think we could have finished off the game earlier. But right now the way it is for us in our situation, we have to fight for everything and that’s OK because it can make us stronger. We will keep pushing. “

‘The beginning of the end for Norwich’

“I can’t see how they get out of it now. You need to be winning the games against the teams in and around you and this was a huge opportunity for them.

“First half they weren’t really at the races, second half they had a go but Leeds were too strong for them and this for me probably signals the beginning of the end for Norwich.

“I can’t really see where they pick up enough points between now and the end of the season.”

Leeds will return to Premier League action on Friday at 8pm as they take on Wolves, live on Sky Sports.

Dean Smith’s Norwich will not play again in March as their next scheduled game will see them travel to face Brighton in the Premier League on Saturday April 2 at 3pm.