Alex Chung is about to lose one of his senior executives and has no idea how he is going to replace her.

Chung’s technology consultancy firm is just one of thousands of businesses struggling to find qualified staff as a brain drain out of the Chinese territory intensifies.

Hong Kong’s status as Asia’s premier financial center was already under pressure from coronavirus controls put in place since 2020 and a Beijing-imposed security law but the Omicron outbreak that struck in December has deepened the city’s economic woes.

On top of weeks-long quarantine for travelers, residents have been further spooked by the possibility of a lockdown and a threat to isolate positive cases in government facilities and separate children from their parents.

Businesses have responded by temporarily basing staff outside the city while an increasing number of ordinary Hong Kongers have fled. In February, the city recorded a net loss of 65,295 residents.

“Hong Kong has always been an ’emigration city’. If people come in at the same time as people leave, the impact should be minimal. But the problem now is that no one is coming, ”Chung told the Financial Times.

Chung said the shrinking talent pool made expanding his business difficult. “More fresh graduates, including mainland and overseas students graduating from local universities, are now looking to work elsewhere than Hong Kong these days,” he said.

The exodus, combined with stricter social distancing and border controls, has prompted warnings that Hong Kong’s economy could be “permanently” damaged and retreat back into recession.

The economy recovered in the second half of last year after entering its first recession in a decade in 2019 after sometimes violent pro-democracy demonstrations. But analysts expect a return to negative growth as the city cleaves to its “dynamic zero” policy aimed at eliminating cases.

“Either zero-Covid or dynamic zero, the government can rename it in whatever way. . . but the consequence is a lack of economic activity, ”said Gary Ng, a senior economist with Natixis, an investment bank.

Ng predicts an economic recession in the first half of 2022 and 1 per cent growth for the full year. “What we are seeing is the divergence of Hong Kong versus the rest of Asia in 2022, he said. “Most other economies are seeing a relaxation of restrictions.”

Despite the gloom, Hong Kong’s solid fiscal reserves of an estimated HK $ 946bn (US $ 120bn), or 33 per cent of gross domestic product, have helped shield the city from any economic shocks.

But economists predict that the anxiety gripping the city could mean fewer companies basing fewer staff in Hong Kong and businesses registering their revenue elsewhere, chipping away at the tax base.

“There is increasing concern that a brain drain out of Hong Kong will affect the ecosystem, where people from all over gather together. Hong Kong is based on free flows of people and capital, ”Ng said.

“My worry is that if this aspect has been lost, and if these [restrictions] continue for a long time, these changes could be permanent. ”

A policy to isolate even asymptomatic cases in government quarantine as well as the separation of Covid-positive children from their parents sparked fear among many professionals.

In an effort to assuage some of those concerns, the Hong Kong Monetary Authority has told banks in recent weeks that their staff were unlikely to be forcibly quarantined in such facilities, two people with knowledge of the discussions said.

“They are taking the initiative to talk to the financial community, but it’s probably quite late in the game,” one of the people said, referring to the exodus.

Another big frustration has been the ref refusal to articulate a Covid exit strategy or to offer a definitive answer on when citywide testing and a lockdown would begin.

Stephen Chong said his accounting firm had attracted a 10 per cent increase in clients after many in his profession emigrated. “Dozens of accountants I know, most of them working at big firms, have left Hong Kong over the past months,” Chong said. 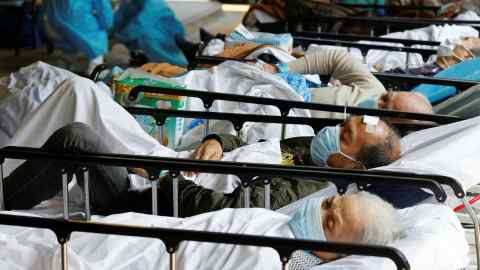 Bank of America projected a 1.6 per cent growth rate for the year with a possible recession in the first half, while a Bloomberg survey of economists predicted a contraction of 1 per cent in the first quarter.

Economic activity in the city, as measured by the IHS Markit Purchasing Managers’ Index survey, plummeted in February to 42.9 from 48.9 in January, the lowest recorded in 22 months.

Even some pro-government businesspeople have raised the alarm. “Hong Kong is facing an exodus of educated workers on a scale not seen since the early 1990s,” said Peter Wong, chair of the Hong Kong General Chamber of Commerce and former HSBC Asia Pacific chief executive.

“This will have a material knock-on impact on the economy. . . there is a real cause for concern if we cannot stem the brain drain. ”