By Chunzi Xu and Sheela TobbenBloomberg

California, already paying record prices for motor fuel, is set to shell out even more with the Golden State more exposed to surging oil prices than the rest of the country in the wake of Russia’s invasion of Ukraine.

Diesel prices at the pump rose to a record high $ 5.185 a gallon on Thursday, according to auto club AAA. The state’s gasoline also rose to fresh record of $ 4.94 a gallon while San Francisco prices topped $ 5, AAA said.

Brent crude futures have surged around 20% in the days since the Ukraine war started, signaling that retail fuel prices could rise further. Meanwhile, high fuel prices continue to drive gains in inflation which has become a liability for the Biden Administration. 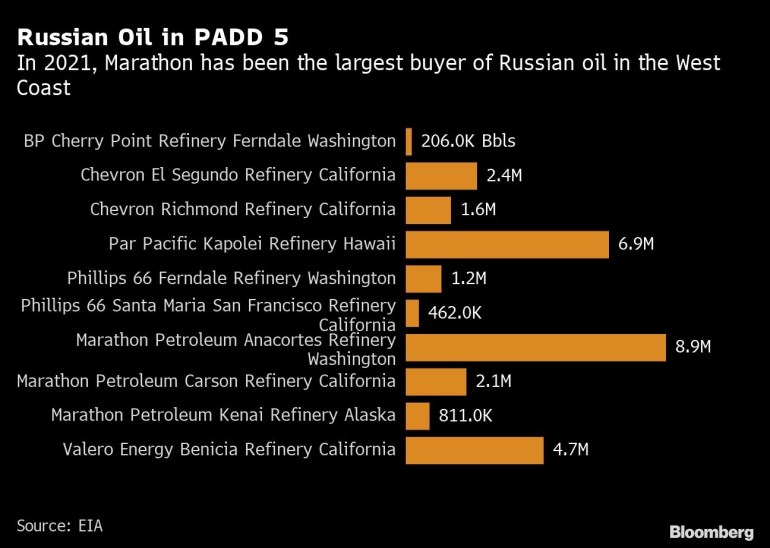 Though Russia accounts for a small percentage of California’s crude supply, companies like Marathon Petroleum, Chevron Corp., and Valero Energy Corp., will need to find alternatives as most US refiners have turned away from Russian oil. That means the state, along with the rest of the West Coast, will likely increase its reliance on Alaska’s ANS crude, which soared to $ 116 a barrel Thursday as Asian refiners may also compete for it to replace lost Russian supplies.

California is geographically isolated from the bulk of US oil production east of the Rockies. Domestic waterborne supplies are limited by laws that require expensive US-flagged ships to transport it, often through the Panama Canal. As a result, West Coast refiners have been some of the largest recipients of Russian oil in the US for more than a decade. 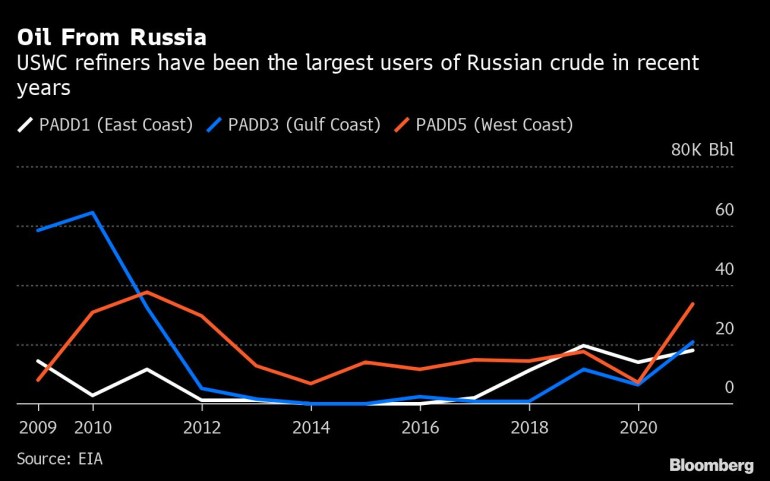 In addition, California state regulators require a boutique, cleaner-burning grade of gasoline and diesel that are not easily blended and few refiners outside the state can make. The state’s fuelmakers must also acquire costly credits to offset high carbon-intensity fuels such as gasoline and diesel, on top of complying with federal biofuels mandates. All of these add to the cost at the pump.

West Coast gasoline stockpiles are at their lowest level seasonally in 13 years at 34.4 million barrels, according to data from the Energy Information Administration. Local fuel production in California is set to shrink further as more refineries convert to smaller renewable fuel facilities.

High prices at the pump might not keep drivers from changing spring break road trip plans, according to Marie Montgomery from the Automobile Club of Southern California. “But $ 5 a gallon will be a wake up call” to many drivers, she said.

–With assistance from Robert Tuttle.