UK chip designer Arm plans to ax between 12 and 15 per cent of staff as it seeks to streamline its business ahead of a hotly anticipated public listing next year.

Arm on Tuesday confirmed reports that it will cut up to 1,000 jobs, with the majority expected to take place in the UK and the US. The company has about 6,400 staff globally, with 3,500 located in the UK.

The move comes just a month after SoftBank’s planned $ 66bn sale of Arm to US rival Nvidia collapsed.

“Like any business, Arm is continually reviewing its business plan to ensure the company has the right balance between opportunities and cost discipline. Unfortunately, this process includes proposed redundancies across Arm’s global workforce, ”Arm said in a statement.

Rene Haas, the newly appointed chief executive of Arm, sent a memo to staff alerting them to the forthcoming job cuts, according to a person briefed on the communication. The move was first reported by The Telegraph.

The sale to chipmaker Nvidia fell apart in February after months of wrangling with regulators in the UK and US. The deal, which would have been the largest ever in the chip sector, was set to give California-based Nvidia control of a company that makes technology at the heart of 99 per cent of the world’s smartphones, and which is expanding into other markets, including data centers, cars and computers.

SoftBank chief executive Masayoshi Son now plans to pursue a public listing for the company in New York, a move that sparked a political furore in the UK last month.

The cost-cutting and efficiency drive reflects the challenge facing Arm. The company will now have to walk a tightrope of ensuring it is profitable enough to attract public investors, while also ensuring it invests enough in new technologies and markets to allow it to grow and compete with emerging rivals. 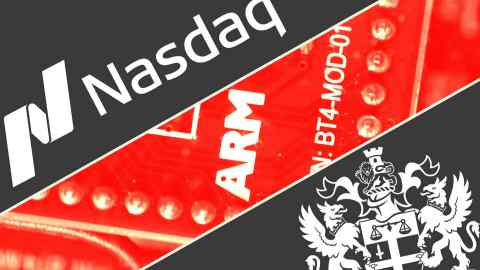 The majority of the job cuts will focus on general, administrative and other non-engineering functions.

As part of SoftBank’s deal to acquire Arm for £ 24bn in 2016, the UK Takeover Panel stipulated that it would have to double its UK headcount over a five-year period, which stood at 1,600 at the time. The requirement to do so expired last year.

In Arm’s regulatory filings in December, the company made a strong case against pursuing an initial public offering and in favor of an Nvidia sale, outlining how public-market investors would “demand profitability and performance”, meaning cost-cutting and a lack of financial firepower to invest in innovative new businesses.

Since plans to pursue an IPO were announced, Haas has also overseen a shake-up of the executive committee, with chief legal counsel Carolyn Herzog, chief strategy officer Jason Zajac and chief technology officer Dipesh Patel all stepping down, according to Arm’s website.